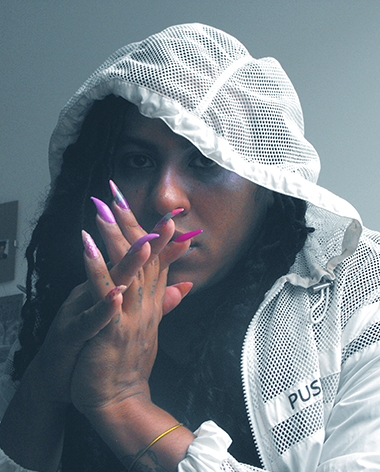 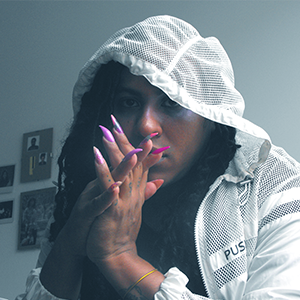 Afro-descendant, diaspora, trans-frontier artist. Anti-racist activist, performer, and queer drawer. They possess studies in Sociology from the Universidad Central de Venezuela and a Master on Sociology of Sciences from the Instituto Venezolano de Investigaciones Científicas. They also studied at the Programa de Estudios Independientes (PEI), at Museo de Arte Contemporáneo de Barcelona (MACBA) between 2014-2015. They has developed a series of workshops and activities around anti-colonial and popular education, as a few more focused on art practices within racialized communities. They is part of the research and political-artistic activism collective, Ayllu, with whom they has participated in the design of the Programa Orientado a la Prácticas Subalternas (P.O.P.S), a program that became part of the Matadero Estudios Críticos, at the Centro de Creación Contemporánea Matadero Madrid. They was part of the exhibition Devuélvannos el oro at Matadero Madrid on 2018; Todos los tonos de la rabia at the MUSCAC in León, España. They has been part of different collective publications that incorporate discourses related to a critic to whiteness, colonialism and sexual and gender dissidence through their texts: No soy queer soy negrx, and the book, No existe sexo si racialización published on 2017, as well as, Este cuerpx otrx as part of Inflexión marica. Escrituras del descalabro gay en América Latina from (2018); No soy 50, son 500 años de resistencia. 10 años de Migrantes Transgresorxs published in 2019. Along with Ayllu collective, they is part of the Sydney’s Bienal 2020 artist selection, and along with Jota Mombaça they have obtained the Pernod Ricard 2020 Fellowship Grant.

With the collaboration of Montana